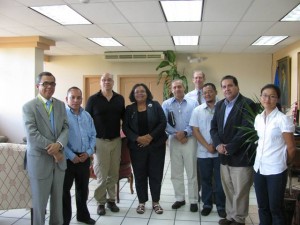 UMass, MDI, and US Forest Service representatives meet with Rector Julietta Castellanos and Director of International Programs at the Tegucigalpa campus of the National Autonomous University of Honduras.
Note: Julieta Castellanos is considered by many to be one of the most influential women in Latin American. She is a sociologist and advocate for police and military reform and combating corruption. Castellanos received the Martin Luther King, Jr. Award in 2012 and the US State Department’s International Women of Courage Award in 2013. The award was presented by Secretary of State John Kerry and First Lady Michelle Obama

The National Autonomous University of Honduras (UNAH) is building on UMass/MDI research and the application of a new model of education for rural communities adopting clean technology and biodiversity-friendly agroforesty systems. The program includes a vast laboratory of sorts in the Department of Yoro, and includes four National Parks, the world’s first coffee processing and export facility powered by renewable energy and a new model of coffee production endorsed by the endorsed by the US Forest Service that increases yields while protecting cloud forest and threatened national parks. Practitioners include the women managed coffee cooperative, COMISUYL, local producers of biofuel and five municipalities that rely on the national parks for their drinking water. The collaboration has resulted in the most popular class at UNAH, Energy and Climate Change, along with a developing masters program in Renewable Energy for Rural Agro-Industrial Applications.

The effort to seek funds for a long-term UMass/UNAH collaboration and the development of the Yoro Biological Corridor has resulted in a proposal for a “debt for development” swap between Honduras and the United States. The debt swap would fund the development of educational programs and collaborations while expanding the application of MDI’s clean technology and production methods throughout the coffee, cocoa, and biofuel producing regions of the Department of Yoro. The swap would also include the installation of a hybrid solar/biofuel utility on degraded lands in the South of Honduras near the border with El Salvador. The utility profits would fund conservation efforts throughout Honduras.