Here I describe the activities during my recent trip to Honduras. The objectives of the trip were to 1) foster further cooperation between our team and our new partners at the American Bird Conservancy (“ABC”) in the common goal of tropical forest conservation, and 2) to meet with crews engaged in research to refine, validate and guide the implementation of a market-based forest conservation strategy developed collaboratively by our interdisciplinary team. 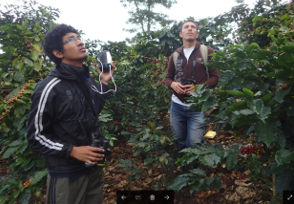 Our team consists of the Mesoamerican Development Institute (MDI), “Birding Coffee S.A.” (a local coffee producing group), and the US Forest Service Northern Research Station. The market-based forest conservation strategy consists of three key elements. The first is solar-hybrid industrial coffee dryers that eliminate the consumption of wood, the fuel used in conventional dryers that is linked to deforestation (Arce et al. 2009, King et al. 2012). The second is Integrated Open Canopy coffee cultivation (“IOC”) in which an area equal to or greater than the cultivated area of coffee farms is conserved as forest or restored. IOC provides habitat for wildlife species, including some priority Neotropical migratory birds, that unable to persist in other habitats (Chandler et al. 2013, King et al. 2017). The third element consists of carbon sales that, in combination with predation of coffee pest insects by birds (Karp et al. 2013) and increased pollination provided by bees (Ricketts et al. 2004) associated with conserved forest compensates farmers for approximately 62% of the income foregone by not converting their forest land to coffee. Added to these benefits are the maintenance of water quality and flow and the insurance of a guaranteed income in years in which coffee prices crash. These are the core elements of our market-based forest conservation strategy collectively referred to as the “Yoro Model.”

A Region in Crisis 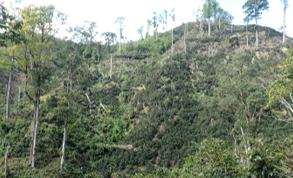 The coffee-growing regions of Honduras are in crisis, with rapid deforestation caused by the expansion of coffee cultivation critically compromising water supplies for rural communities. Within our study region in Honduras, extensive conversion to sun coffee was evident during this trip in areas previously known by our team to be recently forested. For example, we visited the headwaters of the Jacagua River within the nucleus of the Pico Pijol National Park that supplies water for the towns of Tegucigalpita, Minas de Carbon and many other smaller villages. Along the river, we witnessed extensive areas converted to sun coffee well within the buffer zone and nucleus of the park. We learned that these coffee farms were the property of a few very large landowners who were ignoring the protected status of this area. This is significant because typically we are concerned about protected areas depriving local small landowners of subsistence or economic opportunities. As we progressed upriver we passed increasingly more recent cultivation, finally reaching an area consisting of stumps ready to be cultivated, which made it clear that active expansion of coffee towards the core of the protected area is continuing. At the headwaters of the Jacagua River, a local associate Agustin Acosta observed that the 6” pipe that delivers water for nearly 1,000 people was only partially full.

The connection between deforestation and the depletion of water supplies is widely recognized by individuals and representatives of municipalities we interact with, as well as the operators of the 300 MW El Cajon hydroelectric dam, who report a significant reduction of generating capacity as the surrounding watershed is degraded. Given that the protected status of the Pico Pijol National Park does not seem to have impeded deforestation, there is no reason to believe that, unless some new policy or initiative is enacted, any forest will remain within the park by mid-century.

In addition to the accelerating environmental crisis in the region, there is an ongoing demographic crisis occurring, with young people leaving the area due to lack of economic opportunity and emigrating to the US. All of our field crew acknowledged the increasing scale of emigration and had friends or family that have left the region for lack of employment. In addition to exposing emigrants to danger in transit and possible persecution, this movement depletes these communities of their future workforce, citizens and entrepreneurs.

Despite the grave conservation situation, there have been a number of positive developments since my last visit in 2016. At that point we were engaged in training three Honduran field researchers to perform standardized field surveys and quantify above ground carbon stocks. Since then, this field crew has conducted two seasons of bird surveys directed at establishing habitat associations of priority migrant bird species, data that have been analyzed and were presented at the 2018 Partners in Flight conference in San Jose, Costa Rica. The team has also mapped 20 IOC farms that conserve a total of 171 hectares 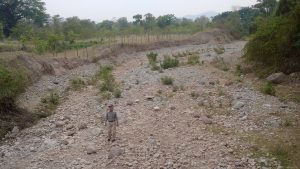 with an estimated carbon offset of 6,995 metric tons of CO2 per year. A second round of carbon sales has taken place at $8 per metric ton of CO2 for a total of $55,600. The current solar-dryer has been in operation for six years, and MDI is preparing to establish a new Off-Grid Carbon Neutral Processing Facility (Factory) with five new dryers (with space for up to 10). This will increase the throughput of the facility to 100 containers of coffee, or 3,187,500 lbs. annually, which is ten times the capacity of the current facility. Each drier also conserves an amount of fuelwood equivalent of 1 hectare of forest per year, which in this region comes primarily from clearing forest.

This season our team was joined by Fabiola Rodriguez, a doctoral student advised by Dr. Caz Taylor at Tulane University and Jeff Larkin of the Indiana University of Pennsylvania/ABC. Ms. Rodriguez is studying the relationship between land use and the fitness of wintering Neotropical migrant birds. Additional studies are underway to quantify the contribution of IOC forest to the conservation of bats and other mammals, the relationship of IOC forest to water quality and yield, and the design of sustainable landscapes for wildlife using IOC and other sustainable land use practices. 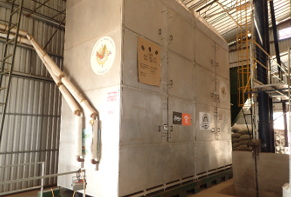 This work is being supported by a cadre of Honduran college students working under the supervision of senior scientists. The results of these studies will refine our understanding of the role of IOC in conserving forest-dependent wildlife and water quality, guide the implementation of IOC through the development of Best Management Practices, and contribute to future efforts planning sustainable landscapes. This work also increases research capacity within the country, which will be critical to the future conservation of Honduras’ wildlife and natural resources, and supports junior scientists, who would otherwise be forced to seek employment outside of their field of expertise.

These developments ameliorate the crisis in other ways besides directly conserving forest with solar driers and IOC coffee, and generating knowledge to inform conservation action. The operation of the off-grid processing facilities currently employ 10 permanent and 55 seasonal workers in well-paying, skilled jobs that are otherwise scarce in rural areas of Honduras. The solar-hybrid drying facilities requires biofuel to supplement the solar thermal energy during the night or cloudy periods, and this fuel is obtained from Jatropha curcas, a native tree species. The more widespread adoption of solar dryers will encourage the cultivation of Jatropha, which MDI will stipulate will be grown on fallow land or pasture, not in cleared forest. This will increase vegetative cover that will enhance the conservation value of the land relative to pasture, and will buffer IOC forest patches from edge effects and increase connectivity across the landscape. Biofuel production will also stimulate rural economic activity, offering livelihoods that do not encourage forest clearing. In addition to stimulating economic activity in rural Honduras, the widespread adoption of the off grid processing technology will support manufacturing in the US. Components for dryers and associated equipment are currently produced in Gloucester, Westford and Lowell Massachusetts, Amherst and Bow New Hampshire, Providence Rhode Island, and Jacksonville Florida.

Future conservation initiatives include the continued expansion of the Yoro Model throughout the 12,000 km2 Yoro Biological Corridor and ultimately to coffee growing regions throughout Latin America. One key element of the expanded implementation of these initiatives is the certification of the carbon so that it can be more widely marketed. Also, other wildlife friendly land uses with high economic value need to be identified and implemented to increase landscape conservation value and connectivity. One candidate is the production of essential oils. MDI developed a pilot project in which farmers in Nicaragua grew allspice, laurel, lemon grass and other crops and extracted essential oils in an off-grid facility MDI designed. Essential oil production also stimulates non-destructive economic activity, and since the source plants are produced in mixed productive systems on fallow land, it further increases biodiversity value and landscape connectivity (King et al. 2007). 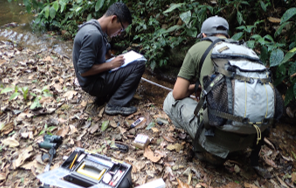 Martin Murillo (left) measures water quality and yield on the upper reaches of the Jacagua River, assisted by Farlem España.

A “Cooperation and Solutions Implementation Agreement” is being established with the State of Yoro. The main goal of this agreement with MDI is to start implementing the Yoro Model, which is currently being implemented within the vicinity of the Pico Pijol National Park, to the Montaña de Yoro National Park. This park is the water source to the City of Yoro, a city of 89,996 inhabitants, in tremendous crisis right now due to water deficit.

In summary, the implementation of the Yoro Model as a market-based mechanism has been successful at a local level, and prospects for adding additional elements to the model and scaling it up to landscape, regional and international scales are excellent. One key impediment is funding. Although international aid agencies have not been willing to support these initiatives, MDI’s success in obtaining a $5 million line of credit will increase the amount of solar-dried and IOC-grown coffee on the market. This will provide the means to certify and thus more widely market the carbon from solar dryers and IOC farms (referred to as “NERC2arbon™). Furthermore, the increased throughput will raise the profile of the project above the threshold to qualify the project for commercial loans and market access that were formerly unavailable.

Although certification of NERC2arbon™ (which is anticipated to cost $250,000) could be supported by coffee revenues from the new processing facility, under this approach it will be delayed until the plant is completed and a period of sales generates sufficient revenue. Given the gravity of the environmental and humanitarian crisis in the coffee growing regions of Latin America, immediate intervention is needed. Key work remains to be undertaken by our team, including; continued mapping of IOC farms; quantifying carbon stocks, generating scientific information needed to inform the implementation of IOC to most effectively conserve wildlife and water resources and ameliorate climate change; education and outreach to coffee producers; and administrative duties as co-managers of the Yoro Biological Corridor. Yet, there are currently few dedicated funds for these activities, and the crew is supported at times by ad hoc funding from a variety of sources. A lapse in funding could cause our team, which we have trained over the past six years, to disband. We welcome advice and support from our existing cooperators and seek opportunities to forge new collaborations. Opportunities may exist within the USDA, which currently invests millions of dollars in the coffee sector in an effort to increase coffee production and quality. Since coffee production will ultimately be limited by diminished water supplies need to grow coffee, exacerbated by microclimatic changes in precipitation regimes, the work being undertaken by our team seems highly consistent with the goals of USDA programs already in place in Latin American. Future steps will include exploring potential synergies with the existing USDA program to support these efforts to increase the economic and ecological sustainability of the coffee growing regions of Latin American. 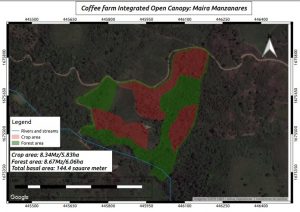 An IOC farm conserving 2 hectares of forest, which in return yields income to the farmer from carbon sales, sustained water quality and yield, and other ecosystem services. To date 171 hectares of forest has been conserved in the project area 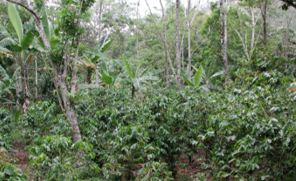 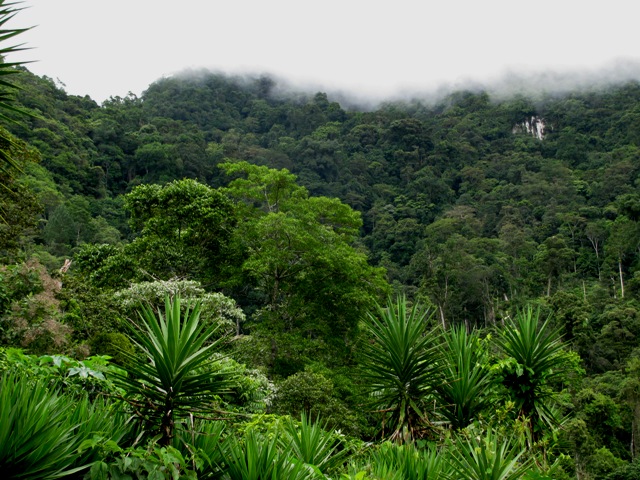