Six Ways Cafe Solar is Different from Other Coffee 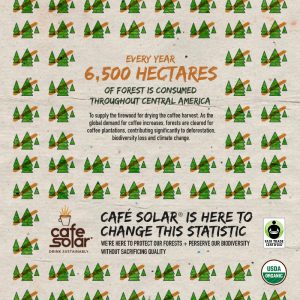 Cafe Solar®, coffee processed using renewable energy technology and promoting the adoption of forest-friendly coffee cultivation in harmony with threatened national parks and forest habitat. As co-managers of Pico Pijol National Park and proponents of the Yoro Biological Corridor in Yoro Honduras, we want to share how coffee can be an instrument for conservation, education, and new forms of employment while addressing coffee’s impact on deforestation.

Central America is now the world’s second largest producer (after Brazil) with Honduras number one in production. As coffee production increases, coffee is replacing tropical forests, including cloud forest, rain forest and pine-oak forest; impacting the headwaters for watersheds. This threatened forest habitat is critical to the well-being of the local municipalities, and globally critical in abating climate change with their vast reserves of sequestered carbon. 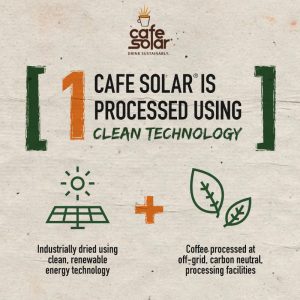 Increased coffee production demands more firewood for drying the harvest in mechanical dryers. The threat from conventional mechanical drying to the region’s forests has been identified as a “environmental emergency” by the Costa Rican Coffee Institute.

Café Solar® is dried using industrial solar/biofuel dryers that eliminate 100% of the use of firewood and electricity consumption by 80%. The off-grid processing facility in Subirana, Yoro, is transitioning to locally produced biofuels for electric power, thereby becoming carbon neutral in drying, milling, and sorting for export. 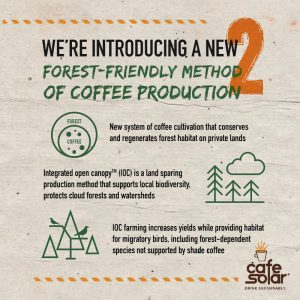 Integrated Open Canopy (IOC)™ coffee production was conceived by a coffee farmer and agronomist, Victor Julio Arce, working with MDI. The protocols have been developed with input from the local community and coffee producers.  IOC coffee is produced in cultivated areas typically 3 hectares with a minimum 1:1 ratio of forest area to coffee production area. These forest areas are existing forest or areas that will be regenerated to secondary forest, or a combination of both. The forest regeneration and preservation areas serve as carbon sinks or areas of sequestration.

Advantages of IOC production include both benefits for the environment[1] and the farmer (land owner)[2]:
–Increase in forest cover providing habitat for many forest-dependent species, including some migratory birds, that are not found in shade coffee
–Development and preservation of forest habitat for carbon sequestration
–Increase in biodiversity and habitat complexity provided by forest buffers that are a component of IOC production
–Greatly enhances all hydrologic conditions for the environment
–Significant increase in yields (typically 2x) for small farmers over shade production
–Reduction in labor by concentrating the area of production
–Additional revenues from carbon trading (estimated at equivalent to 15% to 25% of coffee revenues per manzana) 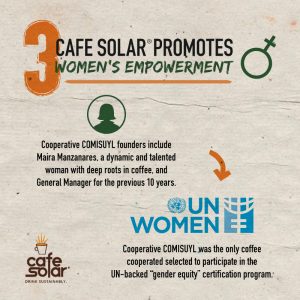 Cooperative COMISUYL has been managed by a dynamic woman and coffee producer for several years. The cooperative was on track to become the first in Latin America to be receive the UN “gender equity certification” before the program’s funding was depleted in Honduras. Currently there are several women in key management positions, such as the operations of the Off-Grid Processing Factory, Quality Control and Export procedures. The Café Solar® program is partnered with the University of Massachusetts’ Center for Women and Work in ongoing research and promotion of the unique role of women in management at the origin to supply and prepare Café Solar® for export. 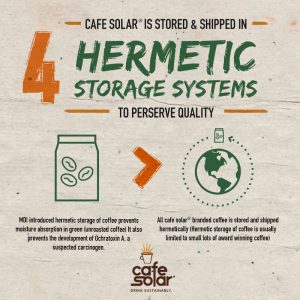 Café Solar® is stored and shipped using hermetic storage systems. MDI introduced hermetic storage to the coffee sector[3] with GrainPro Inc. and they are now endorsed by the coffee institutes of Honduras and Costa Rica. Mold and fungus development can occur when green coffee beans are exposed to prolonged drying periods, such as when patio drying with cloudy and rainy periods, or if the coffee is allowed to re-absorb moisture from the atmosphere during storage and/or transport. Coffee is hygroscopic and readily absorbs moisture from the air when the relative humidity is above 65% (which is most of the time in producing countries).

Of concern in coffee are Ochratoxins primarily produced by species of Penicillium and Aspergillus. Ochratoxin is damaging to the kidneys and liver and is also a suspected carcinogen. There is also evidence that it impairs the immune system. Since Ochratoxin A survives the heat of the roasting process, this is a health concern associated with coffee. The European Union adopted minimum standards for Ochratoxin A in coffee in 2005[4] and tests incoming coffee. In the United States, the FDA does not monitor Ochratoxin in coffee. With properly dried coffee and the use of hermetic storage, the development of molds is prohibited. 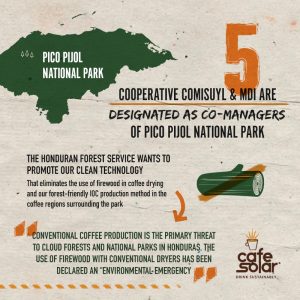 MDI and Cooperative COMISUYL have been appointed by the government of Honduras as co-managers of Pico Pijol National Park in Yoro, Honduras, a forest preserve which provides drinking water to four municipalities. The goal of the designation is to expand and replicate our model of coffee production in harmony with Yoro’s national parks. MDI and the Honduran forest service have launched the Yoro Biological Corridor Initiative to expand the Yoro Model throughout the coffee growing regions of Yoro. The Yoro Biological Corridor Initiative includes the development of carbon trading program for the Café Solar® brand and a new Masters Program for Renewable Energy for Rural Communities with the National Autonomous University of Honduras and University of Massachusetts. 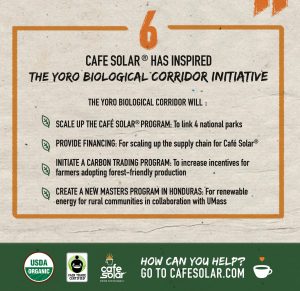 The Yoro Biological Corridor program directly addresses the primary threat to the parks and provides the technology, training, education, and production methods to transform the agricultural landscape of the region to be in compliance with the Convention on Biodiversity, allowing for the preservation of local biodiversity through preservation and expansion of forest habitat.

In addition, the Yoro Biological Corridor provides new technology and agroforestry production systems that will contribute toward meeting the Intended Nationally Determined Contributions (INDC) for Honduras (United Nations Framework Convention on Climate Change), specifically with the commitment to reduce the use of firewood by 39%, and in forestation/reforestation of 1 million hectares of forest.

Six Ways Cafe Solar is Different from Other Coffee — Infographic 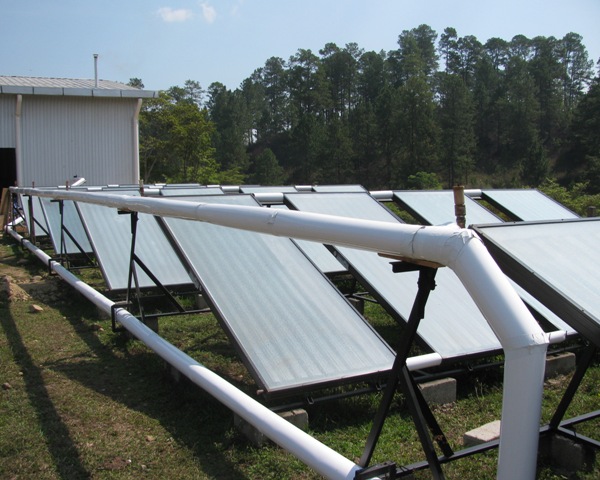